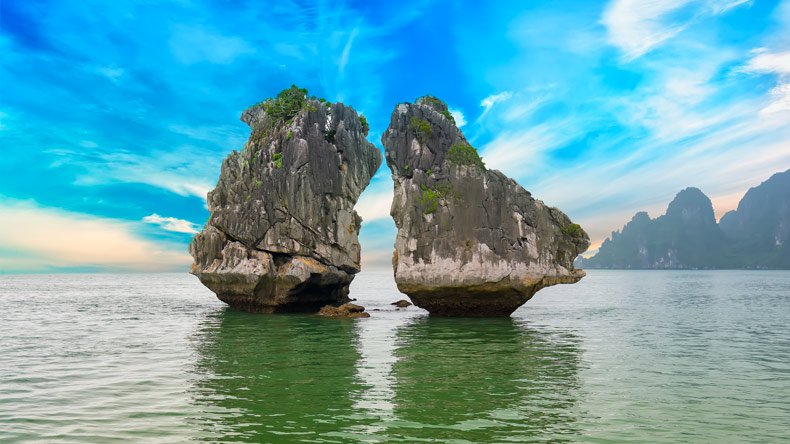 Trong Mai Islet is found in the Southwest of Halong Bay close to Dinh Huong Islet, around 3 miles (5 kilometers) from Bai Chay Tourist Wharf. This recognizable islet takes the form of two chickens: a rooster and a hen, said to be kissing.

The islet stands at about 30 feet (10 meters) above sea level, and according to those with a more romantic outlook, the two chickens have stood by each other for thousands of years, representing the steadiness of faithful love.

"Trong Mai/Kissing rocks/Flighting cocks/Rooster and Hen" are the same name of this islet, which is a symbol of Halong bay!

There is a traditional folk story told by the Vietnamese that talks of the origins of Vietnam. In this story the highest God in Heaven, Ngoc Hoang, sent a ferocious dragon mother and her children to help the early Vietnamese fight off foreign invaders. When the war was won, Ngoc Hoang was surprised that the dragon mother and her children did not return to heaven, and sent two chickens to bring them home. The chicken were so taken by the beauty of Halong Bay that the two chicken themselves fell in love and forgot the mission that Ngoc Hoang had given them! From then on they remained in Halong Bay and over time petrified and turned into stone. 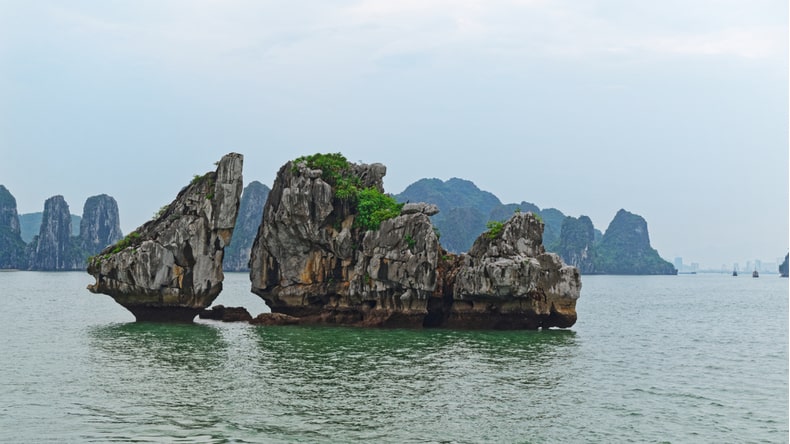 The image of the kissing chickens is an iconic symbol of Halong Bay and appears in many artistic representations of the area. Trong Mai has inspired photography, poetry and paintings that describe the beauty of Halong Bay. In 2000 it was chosen for the logo of Vietnam Tourism!

Thien Nga Islet - A Guide to The Graceful "Swan" Islet

Dinh Huong Islet: A Guide To The Iconic Image of Halong Bay

990 days ago
2replies
Ask a question